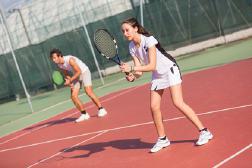 Posted at 06:00h in Uncategorized by YOUPERS Coach
0 Likes
Share

Find a partner and go and play tennis once a week and thereby train your endurance.

Tennis is played by two (singles) or four players (doubles). Women and men can play doubles together (mixed matches).

You will train both your speed and agility as well as footwork and endurance.

Previously, this was an elitist sport. However, nowadays it has gained great importance as a mass sport. In 1988, tennis again became part of the Summer Olympics.

I want to improve my Work-Life Balance!
Start a HealthCampaign!